The human major histocompatibility complex is a genetic region that is of crucial importance for the immune system, the body’s defence line against foreign invaders such as bacteria or viruses. It encodes several membrane proteins (HLA molecules) whose function it is to bind components (so-called peptides) derived from proteins of infectious agents that are present within cells. The resulting complexes can then be recognized by specialized white blood cells, so-called cytotoxic lymphocytes (CTL), and the cells carrying the complexes are destroyed as a consequence. In this way, the immune system can get rid of dangerous intruders. Unfortunately, this sophisticated system is not entirely perfect and may turn against the host, resulting in autoimmunity.

Here, some CTL recognize not only antigenic fragments derived from a foreign protein, but react also with HLA molecules that have bound a peptide which has been cleaved from a normal component of the body, a so-called self-peptide. There are many autoimmune disorders for which such a mechanism of disease initiation is suspected, as in the case of the association between HLA-B*27 and ankylosing spondylitis (AS). We use biophysical techniques in an attempt to understand the differential association of two HLA-B*27 variants (also called subtypes) with AS. The following description of our projects is very technical and directed more to a specialist. It is still largely enigmatic how the deeply buried polymorphic heavy chain (HC) residue 116, which distinguishes the HLA-B*27 subtypes B*27:05 and B*27:09, exerts its effects such that these two proteins are either associated (B*27:05) or not associated (B*27:09) with AS.

Despite more than 15 years of research to solve the structures of the two HLA-B*27 subtypes in complex with more than ten distinct peptides, X-ray crystallography has not been able to shed light on this issue. We also investigate two other subtypes that are differentially associated with AS, B*27:04 and B*27:06, that are distinguished by two amino acids. Two experimental techniques to assess also the dynamic properties of HLA-B*27 subtypes, infrared (IR) spectroscopy (in cooperation with Dr. Heinz Fabian, Robert Koch-Institut, Berlin) and nuclear magnetic resonance (NMR) spectroscopy (in cooperation with Dr. Peter Schmieder, Leibniz-Institut für Molekulare Pharmakologie, Berlin) are in the center of our research. In contrast to IR spectroscopy, NMR spectroscopy allows investigating the flexibility of individual residues at various time-scales, but requires 10-20x more highly purified protein that has to be labeled with certain non-radioactive isotopes (13C, 15N, 2H).

The introduction of these isotopes into the individual components of HLA-B*27 complexes (HC, ?2m, peptide) is cumbersome, time-consuming and, due in particular to the low yields of labeled proteins, very expensive. Using IR spectroscopy, we want to verify that AS-associated subtypes (B*27:04 and B*27:05) are indeed more flexible than those that lack the disease association (B*27:06 and B*27:09). A challenging further series of experiments will assess the dynamics of Cys67, an amino acid residue within the peptide binding groove of the molecule that is thought by some researchers to be involved in AS pathogenesis. The NMR spectroscopic experiments are aimed at analyzing NMR spectra that have already been obtained from HC and b2m of four complexes.

These comprise the analysis of B*27:05 and B*27:09, each in complex with the peptides TIS and pVIPR. The results will provide us with information on the flexibility of all components of the complexes at atomic resolution. 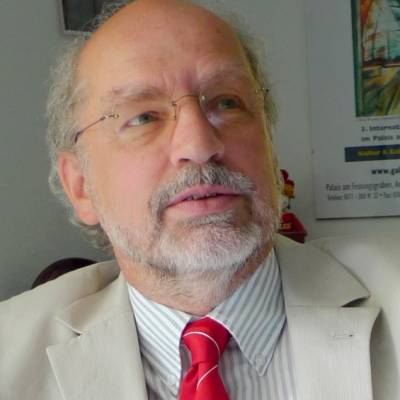 Beginning in 1969, A. Ziegler studied biology at the Technische Hochschule Darmstadt and the Universität Heidelberg in Germany, where he received also his Diploma in genetics and biochemistry following research at the Max-Planck-Institut für Medizinische Forschung, Abteilung für Biophysik. He carried out the work for his doctoral thesis at the Basel Institute for Immunology, Switzerland, on the major histocompatibility complex of the chicken and received his Ph.D. degree at the University of Heidelberg in 1977. Following post-doctoral work at the MRC Laboratory of Molecular Biology in Cambridge, UK on monoclonal antibodies against human and rodent cell surface antigens under the guidance of the Nobelprize winner Dr. César Milstein, he became a staff scientist at the Medizinische Klinik, Abteilung II, Universität Tübingen in Germany, where he continued working on human leukocyte differentiation antigens. In 1988, A. Ziegler became Associate Professor for Molecular Immunology at the Institut für Experimentelle Immunologie, Universität Marburg in Germany and shortly after Full Professor and Director of the Institut für Immungenetik, Charité-Universitätsmedizin Berlin at the Freie Universität Berlin, Germany. His research interests in Berlin were twofold: on one hand, he continued his work on genes and antigens belonging to the extended major histocompatibility complex (xMHC) and their association with disease, but he was also interested in the molecular basis of mate choice, concentrating on xMHC-encoded odorant receptors and their involvement in reproduction. Since his retirement from the Charité in 2013, he works as CEO of Ziegler Biosolutions in Waldshut-Tiengen, a small town in Germany’s Southwest. His current research interests include the biology of the xMHC in human and other vertebrates, monoclonal antibodies with T cell receptor-like reactivity, and the analysis of structure/function and dynamic relationships of membrane molecules. He is particularly fascinated by HLA-B*27 class I molecules and their association with the rheumatic disease ankylosing spondylitis. A. Ziegler’s non-scientific interests include art and chess. He is married to Dr. Barbara Uchanska-Ziegler, who shares his research interests; they have two sons.